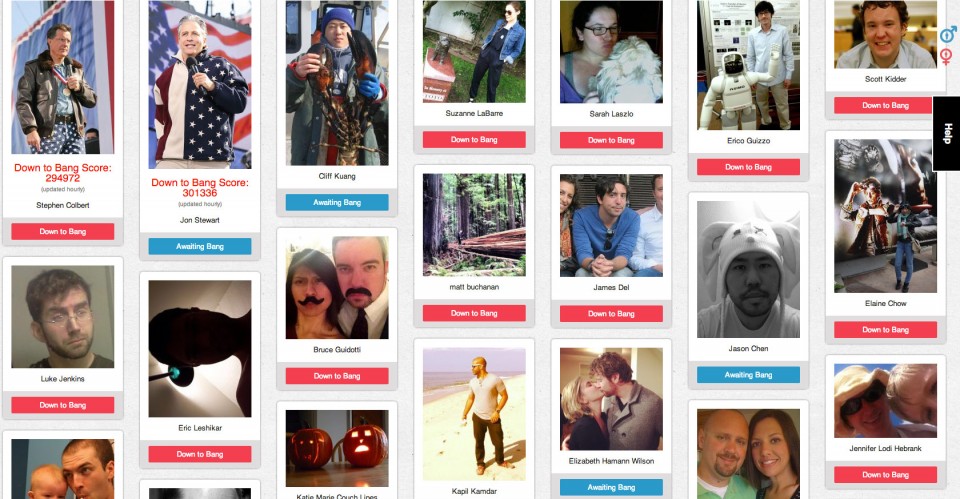 I heard recently about a new Facebook app called Bang With Friends that lets you secretly tag those of your contacts whom you’d like to ‘bang.’  If the friend also has the app and has tagged you as a potential bang-ee, you’ll both be notified, and can presumably hook up.  Skeeziness of trying to sleep with your friends aside (speaking from experience, I don’t recommend it), the interactions Bang with Friends proposes are interesting, and warrant a further look at why I think the app will fail at its misguided/intended purpose.

On the surface, you could look at the choice options of BWF using a simple 2×2 matrix, like below:

*For arguments sake these are only the primary outcomes, conformed to the subjective premise set forth in BWF. Obviously, sleeping with a friend could be very very bad, and not sleeping with them could be good in the sense that it doesn’t destroy a friendship.

Here’s a deeper analysis, keeping in mind that we have more than just the binary options and outcomes the BWF designers assume:

I also took into account a situation where direct communication took place (ie, unobscured by an app). Notice again that there is no difference in outcomes for a user who actively wants to bang and a user who is indifferent. Listing it all out we have four plausible outcomes between any two BWF users:

I’ve ordered these outcome based on what I subjectively say is worst-to-best, again taking into account the BWF designers simplistic premise that banging=good. With that order in mind, let’s assign values to each outcome:

Now we switch out the outcomes with numerical values, and we have a crude scoring system:

Again, notice there is no difference in outcome for a user who actively wants to bang and a user who is indifferent. The best option for both attitudes is to report thru BWF that they are interested in banging a friend (both the best and worst case outcomes are positive), while the outcomes are always the same for a user who actively doesn’t want to bang a friend. This is important because, according to this analysis, the best strategy for playing BWF is to select everyone in your friends list as friends you’d like to bang.  In short, there are no checks in the design of BWF on false positives, and there is an actual incentive to indiscriminately/falsely report on whom you’d like to bang.

by Chris 10 years ago