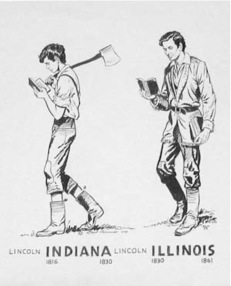 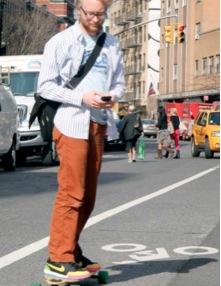 West Los Angeles – and especially here at UCLA – is full of folks who seem fixated on their hands (Figure 2).  Around dusk, a saintly procession of plodding pedestrians, faces bathed in blue halos cast by their smartphone screens, slowly migrates through the streets.  After dark, passing cars are often identified first by their headlights, then by a brightly glowing rectangle in front of their dashboard, the driver invisible.  At lunch and dinner, friends – the more polite ones, anyway – peek into their laps to covertly transceive messages, resurfacing half a minute later to attempt a conversational re-entry.

Changes in communications media in the past few years—namely the growing ubiquity of smartphones, social networks and access to high-speed data connections—have again foregrounded the idea of displacement and distraction via media.  I say ‘again’ because the notion of removing yourself from immediate physical reality and social situations through media is not exactly new; people have had the option of doing so since the advent of books (Figure 1).  However, an important distinction exists in media that’s being used now.  Reading a book is strictly a one-way experience; communications media like those mentioned above can be used for fairly rich, multiplex communication in service of real relationships with real demands, virtually anytime and anywhere.  As a result, many relationships—particularly sexual/intimate relationships—are mediated by communications technology virtually by default. This is not necessarily a bad thing.

We now have the option of staying connected with friends and family, extending relationships in some ways that were not easily possible in the recent past:  Skype calls, Facebook or photo sharing websites can be good ways of keeping in touch with friends and family, especially over long distances.  We have new variations on flirting with, arousing and hooking up with one another: dating apps like Grindr, video chat sites like Chatroulette, and the general practice of sending explicit self-portraits all present possibilities of risqué sexual activities that would not exist without this new communication media.  Modes of communication and connection that have developed over the past decade or so still share some common mechanics with earlier forms of communication media such as radio, television and cinema.  Speaking very generally, they tend to present audio-visual metaphors—text, verbalizations, images—as stand-ins for physical presence/experience, or as proof that something objective has taken place.

by Chris 9 years ago